Bugatti Bought for $1,850 is Concours Winner

Fifty years ago, a magazine ad offering a 1936 Bugatti Type 57 coupe for sale in California caught the attention of car collector Rick Grant of Dayton, Ohio. Now, the classic he bought sight unseen in 1968 for just $1,850 has caught the eyes of discerning car show judges. 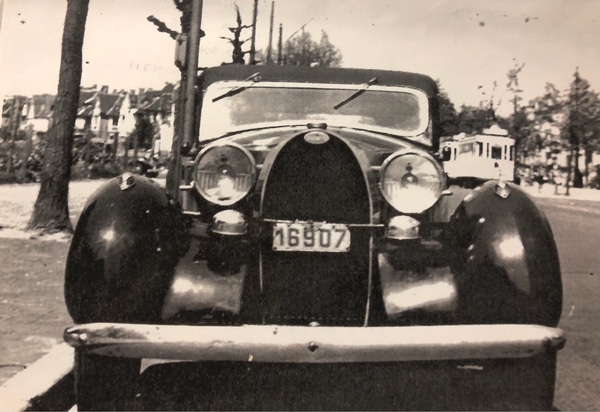 After decades of research and concours quality restoration, the sleek coupe emerged as a show car in 2016. (Grant discovered that the coachwork was actually by Binder, not Gangloff as advertised.) It won special awards at the Amelia Island Concours and Pinehurst Concours, and took Best of Show honors at the 2016 Dayton Concours (photo, above) and this year’s Cincinnati Concours. Last summer, the Bugatti returned to the West Coast, where it was shown at the Pebble Beach Concours and driven in the Tour d’Elegance. 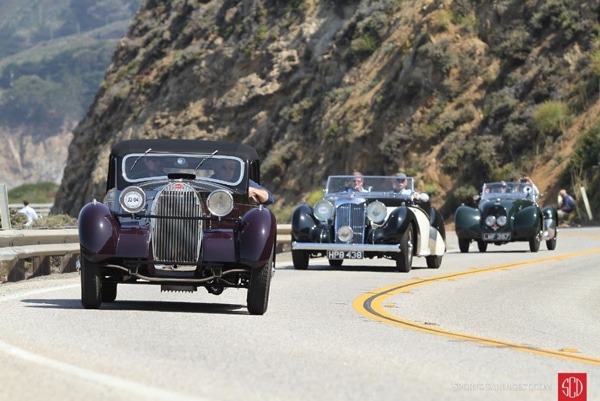 I knew from Facebook posts that Grant had purchased the car for a crazy low price, but what fascinated me the most was that it happened so many years ago. I wanted to document this in a blog post, so I contacted Dale Oakes, owner of Euro Classics Ltd., who maintains Grant’s extensive collection of primarily vintage sports and race cars. I asked if there was a registration or bill of sale that I could use to illustrate a story.  Jackpot! Dale provided me with the photos shown here of the original ad, Grant’s typewritten offer and early photos of the car.

NOTE: I could end the post here. . . but circumstances surrounding the purchase piqued my curiosity.

Imagine a car buyer’s strategy in the pre-internet, pre-fax, pre-next-day-mail, pre-Fedex days. With no phone number in the ad, an out-of-town buyer was relegated to responding by what’s now referred to as “snail mail.” With the seller 2,000 miles away in California, regular first class service would be too slow, so “air snail mail” which cost an additional 4 cents – for a total of 10 cents – would have been a must. (Yes, in the 1960s, people made a conscious decision on whether a letter or the recipient was worthy of the air mail upcharge.)

In this situation, Grant responded in a manner typical of an auto industry executive of the day. Dictate a letter like the one pictured below, mail it, then wait and wait for a response… if any. 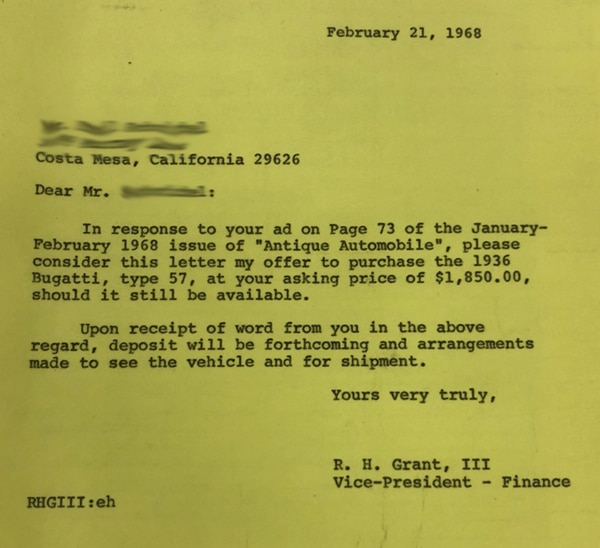 Consider the obstacles Grant faced in his desire to purchase the Bugatti:

Nowadays, with online selling platforms such as Hemmings and Bring-a-Trailer, prospective buyers learn of a new offering simultaneously the world over.

So many variables! We know that Grant got the car, but how?

A Seller with Integrity

With the help of Google, I was able to track down the seller and spoke with him on the phone. His personal info has been redacted from the documents pictured above, but let’s assume his name is Emil. I learned he had no idea what became of the tattered Bugatti since that day in 1968 when the Red Ball Movers truck came to pick it up. He was delighted to know that the car is good as new and doing so well on the concours circuit.

Emil has been a car guy his entire life. He’s from Corning, New York and remembers attending some of the first races at Watkins Glen, when the race course was comprised the town’s public streets. He’s had all sorts of cars, from a 1927 Willys-Knight (a favorite for road trips) to a Berkeley 3-wheeler.

As for selling the car to Grant: simply stated, the Ohioan’s offer was the first received and that took precedent, even over another buyer who showed up at Emil’s doorstep with cash in hand.

Emil was no stranger to selling cars, claiming to have owned 300 over the years. Even though Southern California was a collector car mecca – the phenomenal Briggs Cunningham Car Museum was just minutes from his home – Emil listed the Bugatti for sale in a national club publication figuring it’s future would be more promising in the hands of a true aficionado.  A wise decision!