Due to the coronavirus pandemic, there’s financial help available for concours d’elegance and other car events and especially for their benefiting charities. Along with small businesses, private non-profit organizations, such as car events with 501(c)(3) tax-exempt status, may apply for loans and grants through the Small Business Association.

Events large and small may apply for an Economic Injury Disaster Loan (EIDL) that offers an immediate loan of up to $10,000 which does not have to be paid back, even if the loan is denied.

Large events with paid staff may seek loan relief through the Paycheck Protection Program (PPP) included in the recently passed CARES Act. Portions of these loans used to maintain payroll, keep workers on the books or pay for rent, mortgage and existing debt could be forgiven, provided workers stay employed through the end of June.

Here’s a list of concours events canceled or rescheduled due to COVID-19.

Photo: At the Eyes on Design show in Detroit, visionary Judge Jeanette Bridges uses her sensation of touch to feel the details of this Willys Knight.

The effect of the Des Moines Concours d’Elegance reducing the price of admission from $15 to zero in 2013 was a significant increase in the event’s annual donation to Children’s Cancer Connection. I learned this not in an official announcement, but in the comments section of a Hemmings blog post, where reader Robert Cunningham responded to someone suggesting the need for lower prices at concours events.

Here’s a synopsis of his reply:

… if you’re looking for a quality concours “… that the unwashed masses can easily afford”, you’ll want to check out the Des Moines Concours d’Elegance in September. The Iowa show has been growing steadily during the past 20 years, and it recently changed from a ticketed event to a free event.

As a result, attendance grew from 1,000 visitors in the early years to nearly 15,000 recently. Even the exhibitors [of the cars] pay no entry fee.

How do we do it? Sponsors pay for booth space where the throngs can view their wares, and the profits go to a local charity.

As for the quality of vehicles, we continue to attract Auburns, Cords, Duesenbergs, Cunninghams, Ferraris, and all  the high end classics… definitely something for everyone!

Could this be the concours business model of the future for other events?

The Des Moines Concours is held annually on the second Sunday of September on the streets adjacent to the John and Mary Pappajohn Sculpture Park in downtown Des Moines. More than 170 cars can be exhibited and there’s plenty of spectator parking nearby.

The major car show season kicked off today with the 14th annual Boca Raton Concours d’Elegance and there’s barely any mention on social media. It’s now 2pm on show day and the most recent Facebook post from the event itself is six days old. There are two Instagram photos from last night’s gala and the Twitter account is way old.

The point I want to make is:

Car lovers around the world are interested in what’s being shown on your show field!

Sorry for singling you out Boca — you’ve done a fantastic job raising more than $10 million for Boys & Girls Clubs of Broward County —  but you’re depriving tons of folks the opportunity to vicariously enjoy your fantastic event.  In real time.  By tomorrow, the thrill will have waned and the opportunity lost to interact with attendees.

I’ve actually heard people say that organizers of major car events have a “moral obligation” to the collector car hobby to share their efforts on social media.  Hmmm?

It’s no secret that fewer young people are becoming involved in the collector car hobby. Just do a web search on “aging demographic” in quotes followed by classic or collector car and you’ll see thousands of of links that rehash the obvious.

Or you can attend just about any concours d’elegance or car show and look around to see how few people are half your age or younger. (Exceptions to this argument would include a cars & coffee or Radwood event, which while popular with a younger audience, only make a dent in the significant challenges facing the collector car industry as a whole.)

Much credit is due Hagerty, SEMA and other organizations for their outreach programs and event organizers who cater to millenials by offering beer gardens, kids activities and other amenities. But I’ve yet to hear of anyone advocating the benefits of a no-brainer campaign as simple as:

Don’t attend a collector car function by yourself!

This one simple gesture by an individual spectating or exhibiting at a car event can go a long way toward increasing participation in the old car hobby (which, by association, includes vehicles like trucks, motorcycles, vintage tractors and wooden boats.),

Posing with IndyCar champ Ed Carpenter or sitting on a vintage scooter makes for lasting memories, both for these lucky youngsters and also the grey-haired gentlemen taking the photos. That’s certainly quality time well spent!

Posing with IndyCar champ Ed Carpenter or sitting on a vintage scooter makes for lasting memories, both for these lucky youngsters and also the grey-haired gentlemen taking the photos. That’s certainly quality time well spent!

Please follow my line of reasoning as to why such a simple effort as bringing a guest addresses waning interest in old cars.

Here’s what can happen when you bring someone, preferably half your age — a generation younger. If you’re 60, bring a 30-year-old. If you’re 40, bring a 20-year-old. That’s an important factor.

Making it a family affair 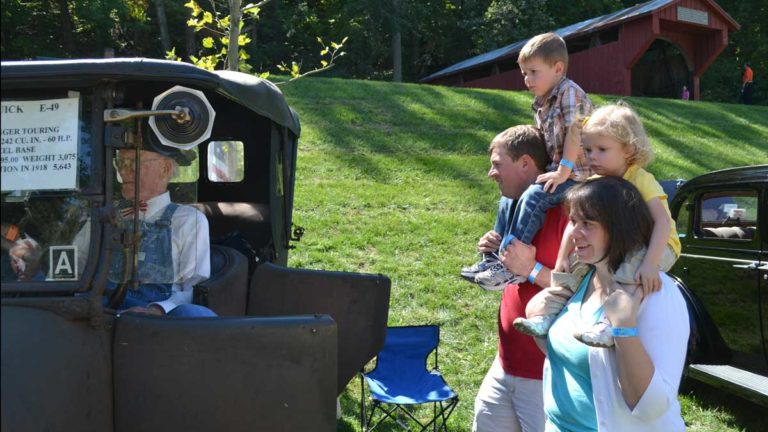 This family learned all about an unrestored 1918 Buick at the Dayton (OH) Concours d’Elegance. Owner, Robert Anderson, drove this remarkable car 20 miles to the show. I was so fascinated that I recorded a video of him arriving and also the operation of the engine’s external valve train. 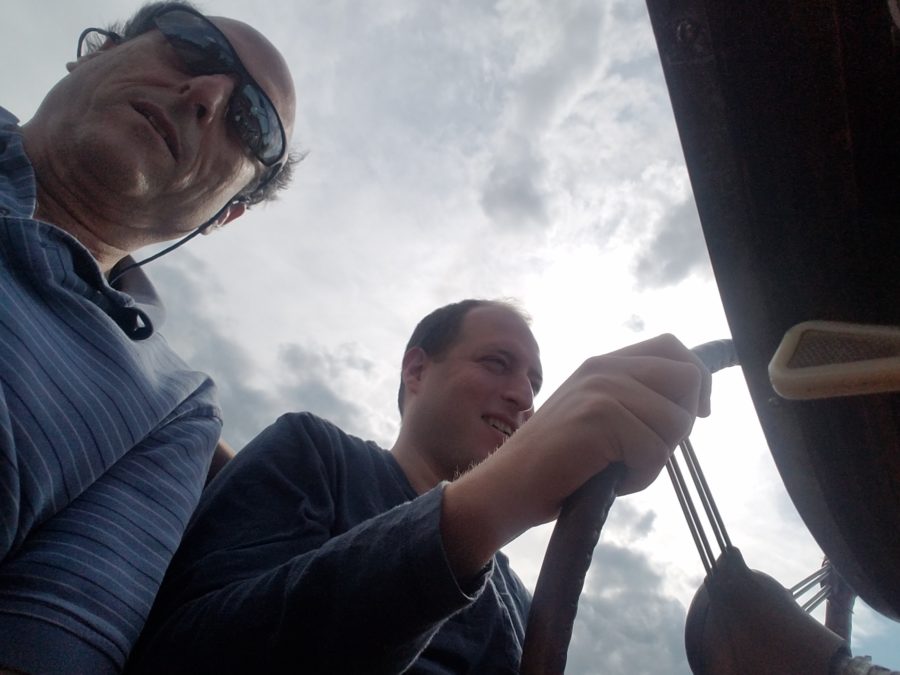 Twice this summer, I’ve had the pleasure of traveling 100s of miles in a 60-year-old sports car to participate in multi-day automotive activities with family members half my age. Similar to the youngsters mugging for the camera in the photos above, I’m fortunate to have a digital record of the extraordinary adventures.

Photos: all images by John Olman, except the featured image courtesy of David Smittle.

For a period of several hours last Saturday morning, trios of uniformly attired, straw-hatted men and women intently tapped their smartphone screens while scrutinizing more than 130 cars, motorcycles, bicycles and carriages.  The occasion was the 16th annual Keeneland Concours d’Elegance car show in Lexington, KY, and the class judges pictured above recorded scores electronically rather than by pencil on paper for the first time.

Each trio was assigned to evaluate one of 19 classes of vehicles separated by make, style or function and arranged in a circle of six to eight cars. Each circle had a designation such as: Coach Built Classics, Foreign Collector, Classic Ford Thunderbirds, etc.

Judges use a points system to meticulously analyze each vehicle in terms of appearance, quality and originality of the exterior, interior, engine compartment, instruments, metal plating, tires and other aspects. The most common practice is for each vehicle to be assigned a 100 point score, then have each judge individually make deductions on his or her scoresheet for any faults discovered. The Keeneland Concours system of scoring ranks the entries in each class by point value, with awards going to Best in Class and Runner-up. (In addition to the class awards, there are special awards such as People’s Choice, Best British Car, etc) 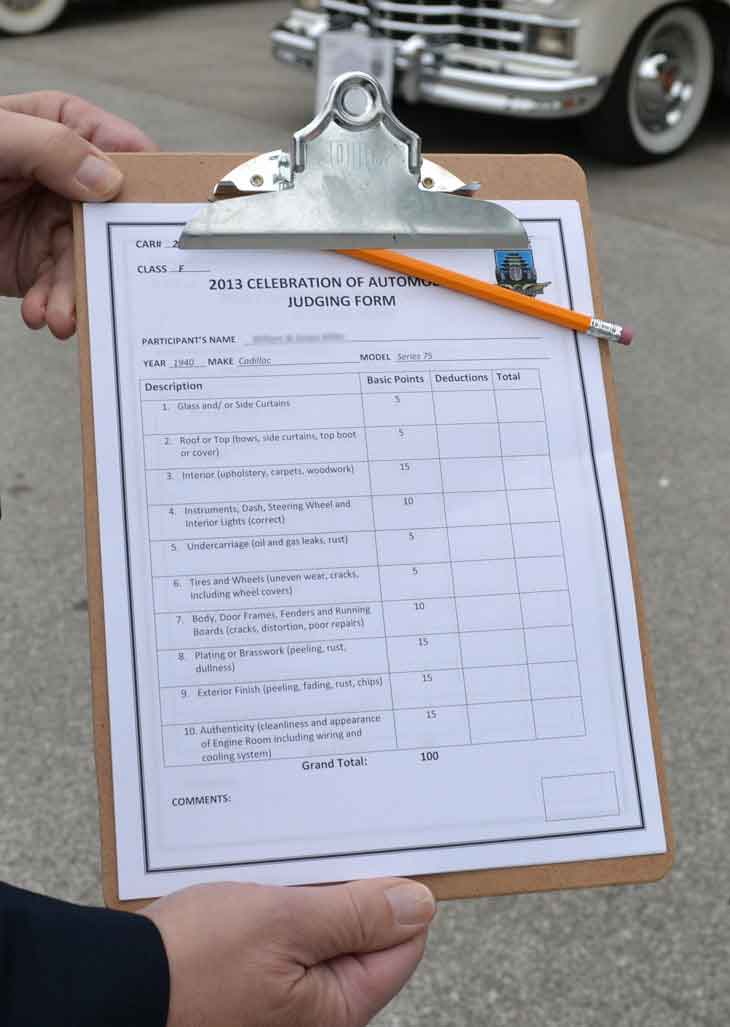 In past years at Keeneland, scores on the 400-some-odd judge’s sheets were crunched in a remote room, free of distractions. This time, presumably, numbers were crunched in “the cloud” and results were made available to the committee in real time. (see note below) Remember that the awards program takes place mid-afternoon, so volunteers need plenty of time to line winners up for the podium presentation.

Digital scoring input is not new on the car show circuit. Over the last few years, judges have utilized tablet devices at several major events, but mostly as an adjunct to paper and pencil. Sometimes a local student would be assigned to a judging team to assist with use of the devices. But going entirely paperless with a smartphone app is a technological milestone for a nationally recognized concours d’elegance.

In past years, scores on the 400-some-odd judge’s sheets were crunched in a secluded room. This time, presumably, numbers were crunched in “the cloud” and results were made available to the committee in real time. (see note below) Remember that the awards program takes place mid-afternoon, so volunteers need plenty of time to line winners up for the podium presentation.

Digital scoring input is not new on the car show circuit. Over the last few years, judges have utilized tablet devices at several major events, but mostly as an adjunct to paper and pencil. Sometimes a local student would be assigned to a judging team to assist with use of the devices. But going entirely paperless with a smartphone app is a technological milestone for a nationally recognized concours d’elegance.

Many Kentucky visitors and residents would agree that understated elegance is the norm throughout the idyllic Lexington countryside, which includes the concours venue, located on the well-landscaped grounds of the venerable Keeneland Race Course. (That’s where much of the movie Seabiscuit was filmed.) Perhaps it’s the relaxed atmosphere that explains why the significant decision to use smartphones came without fanfare.

In fact, the only explanation of this novel approach appears in the last  paragraph of the last section of the 140-page hardbound Keeneland Concours program. 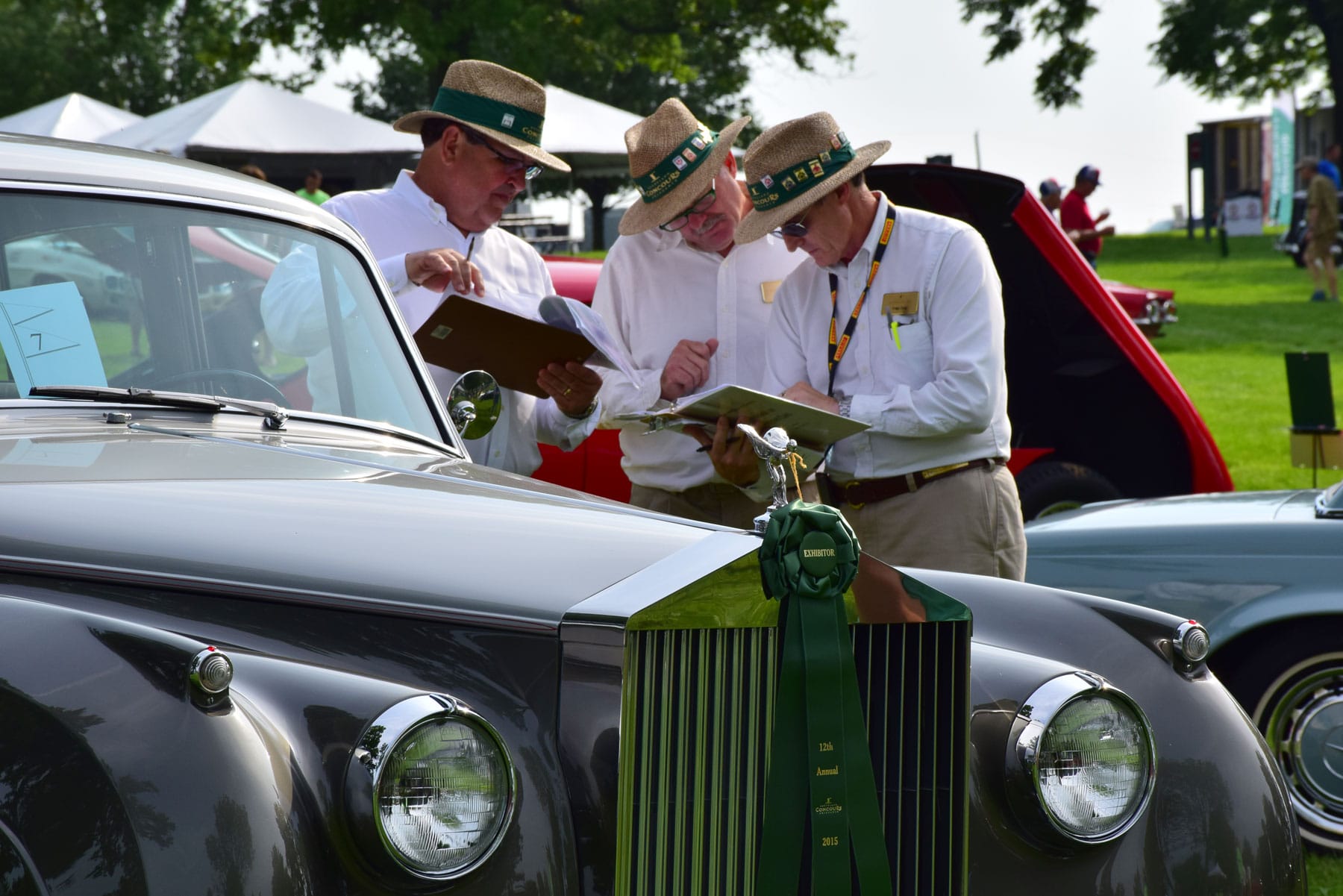 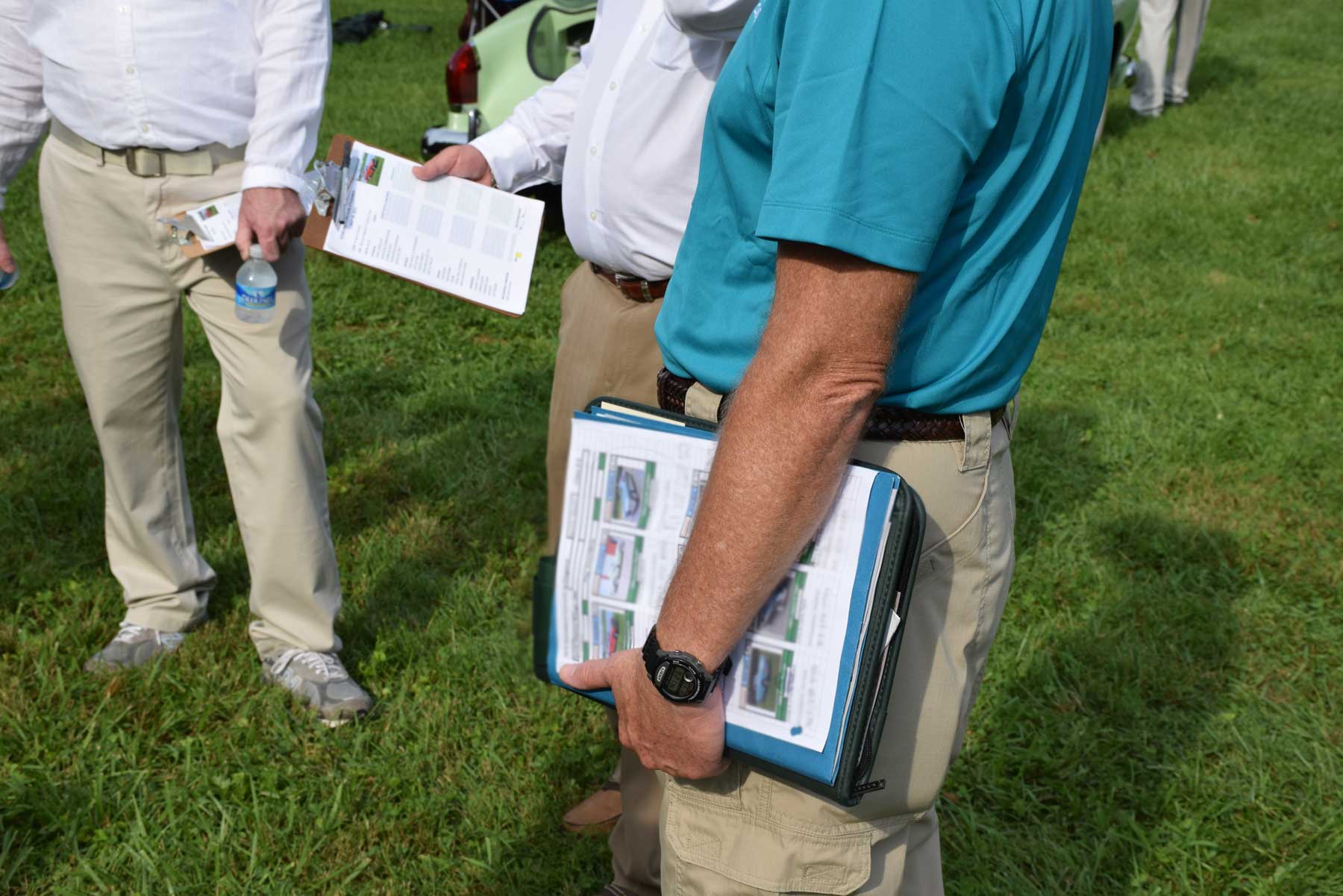 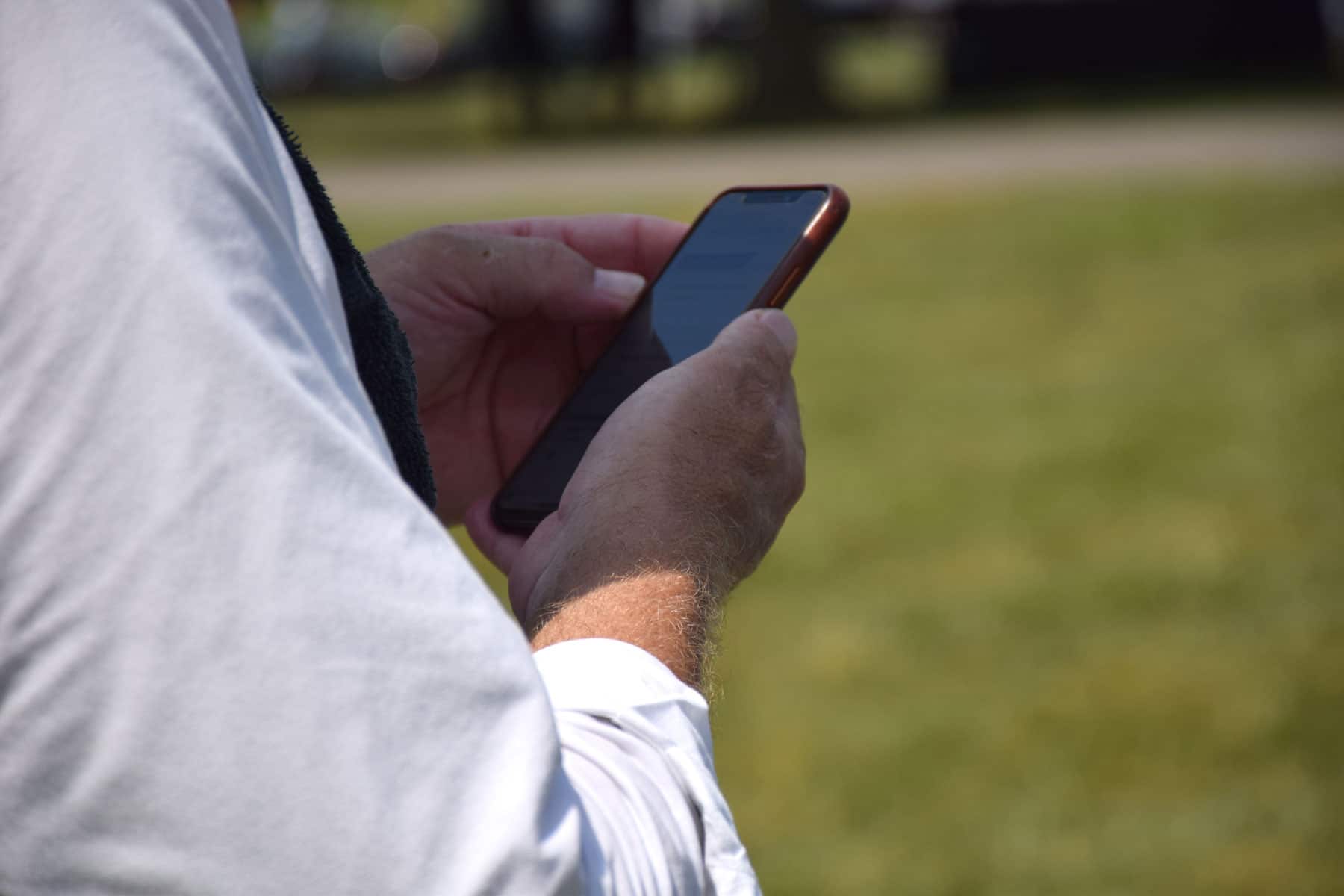 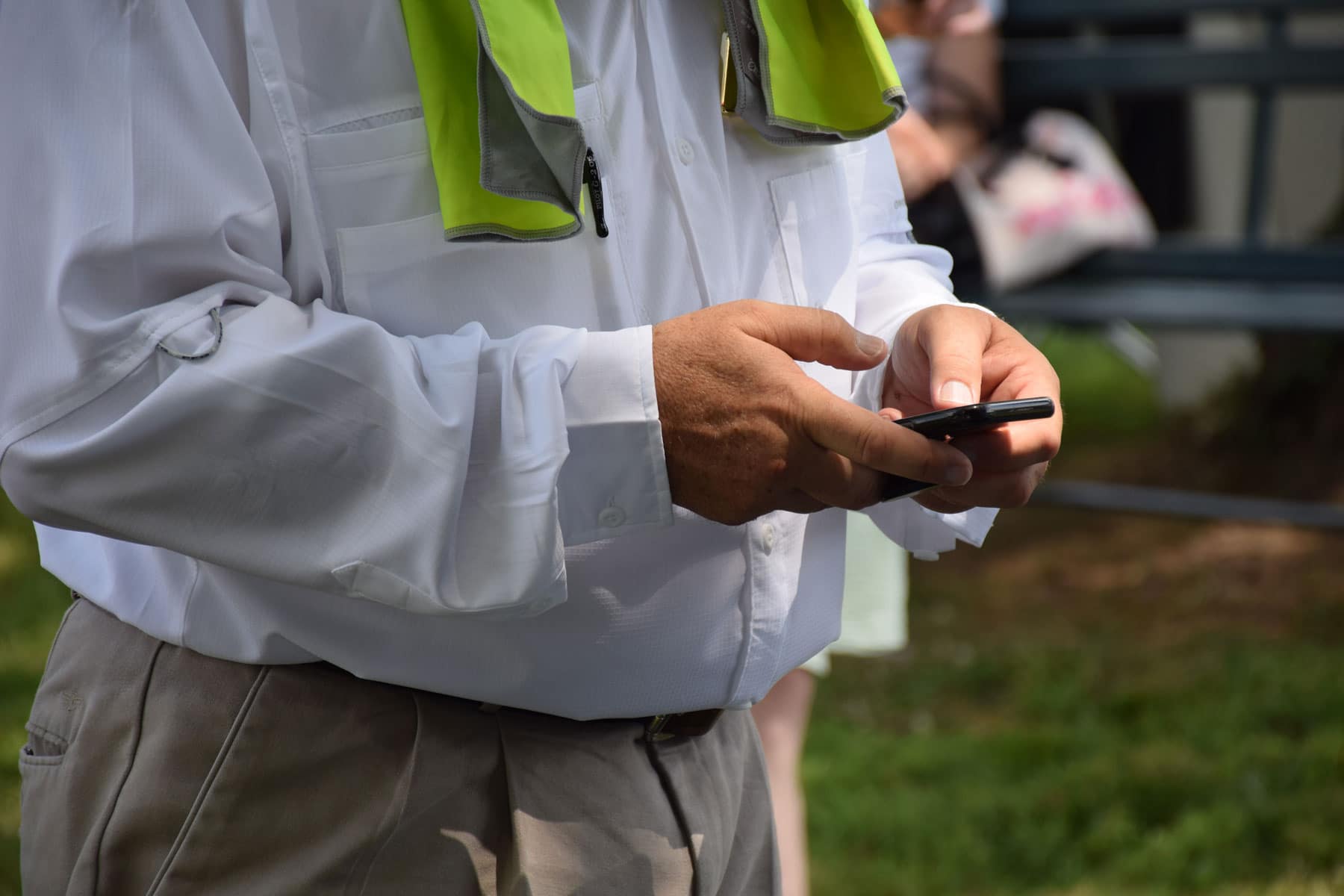 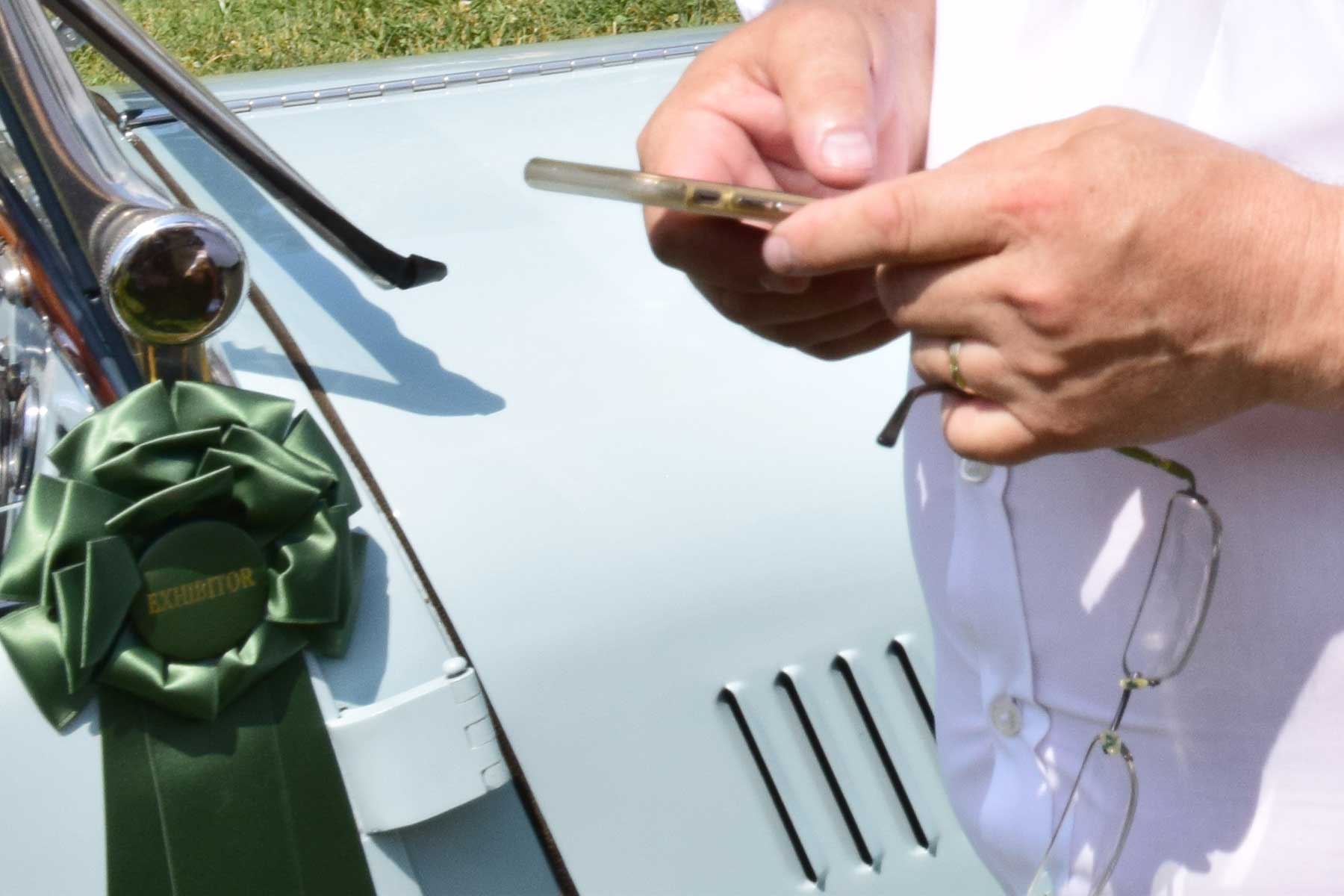 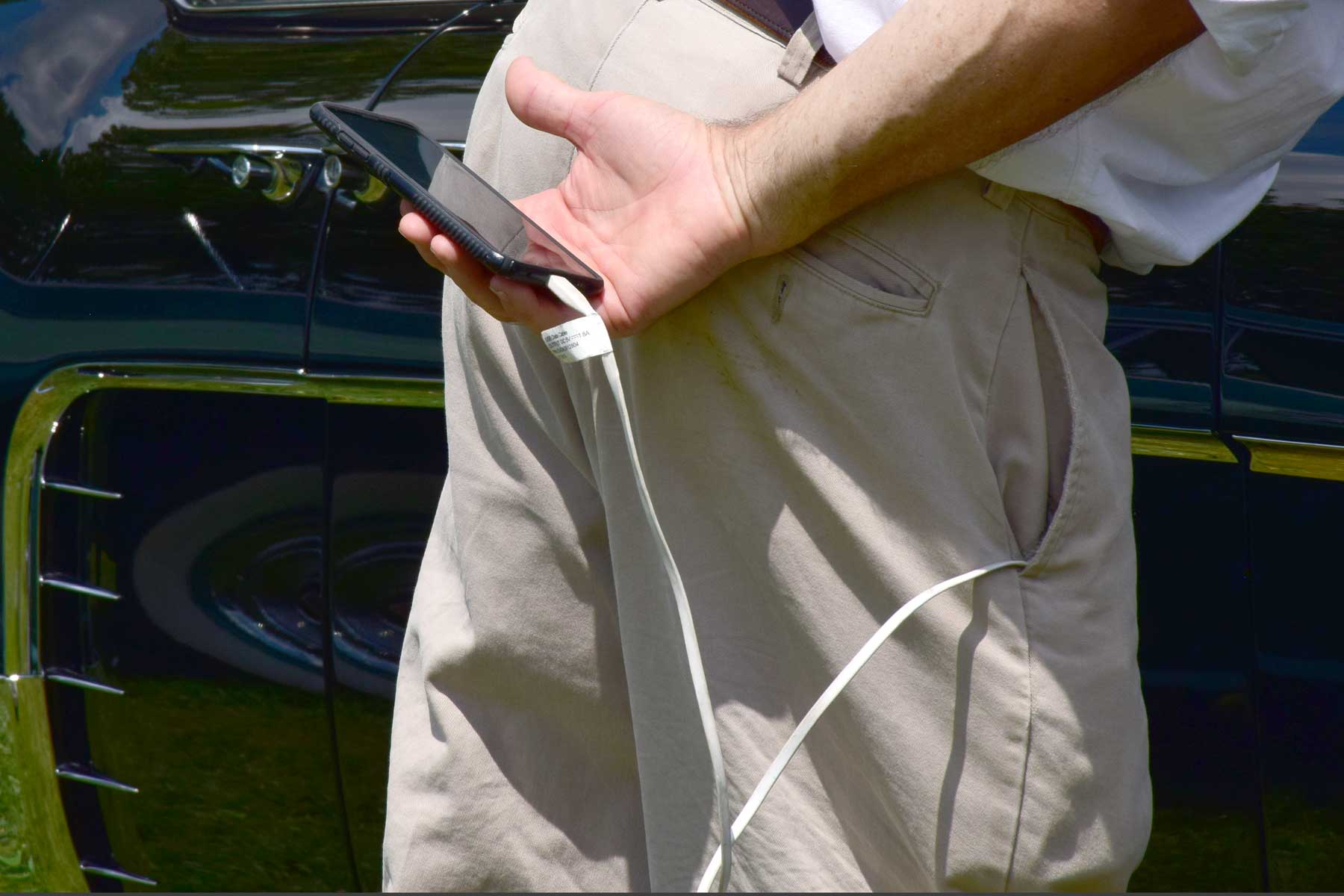 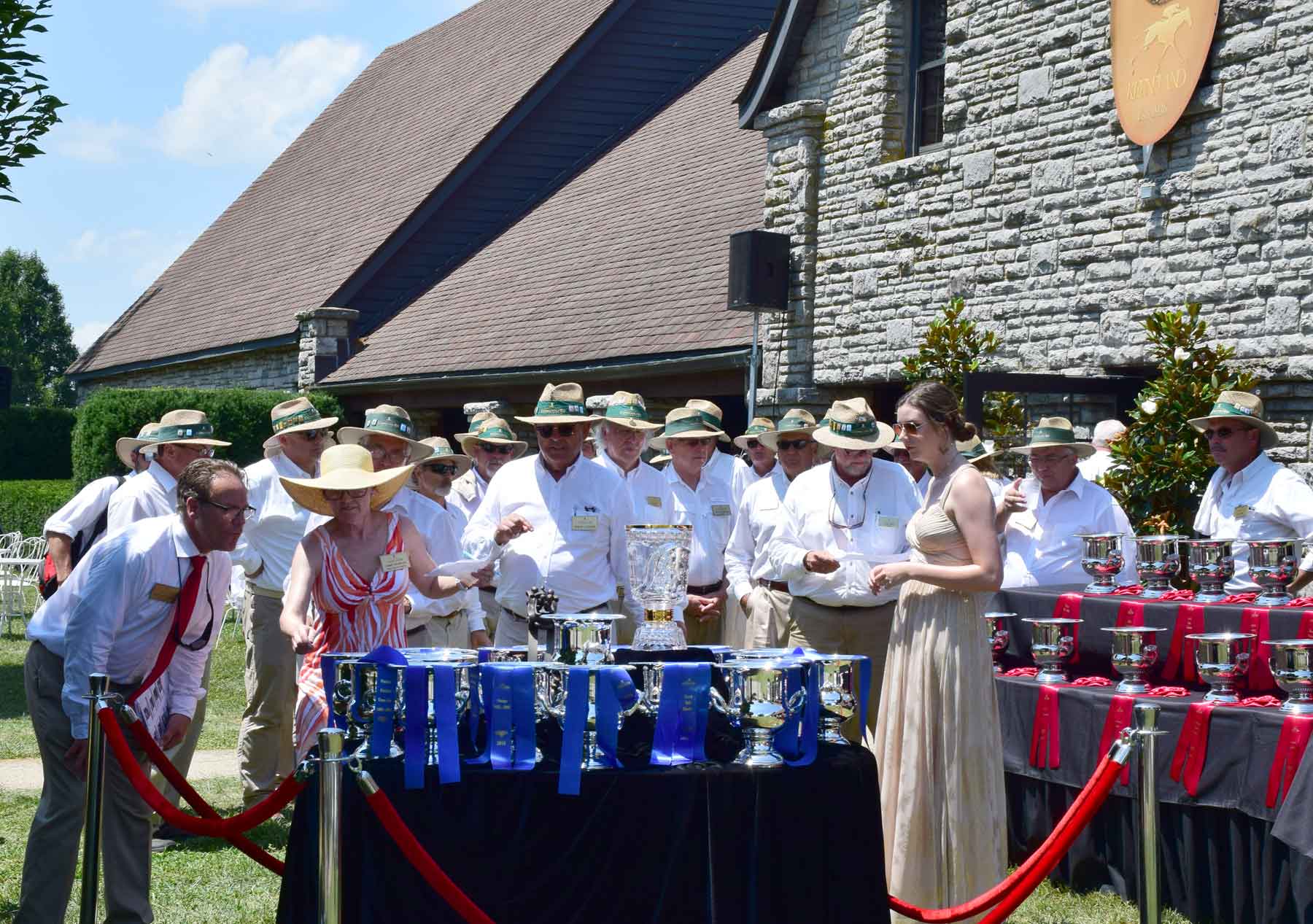 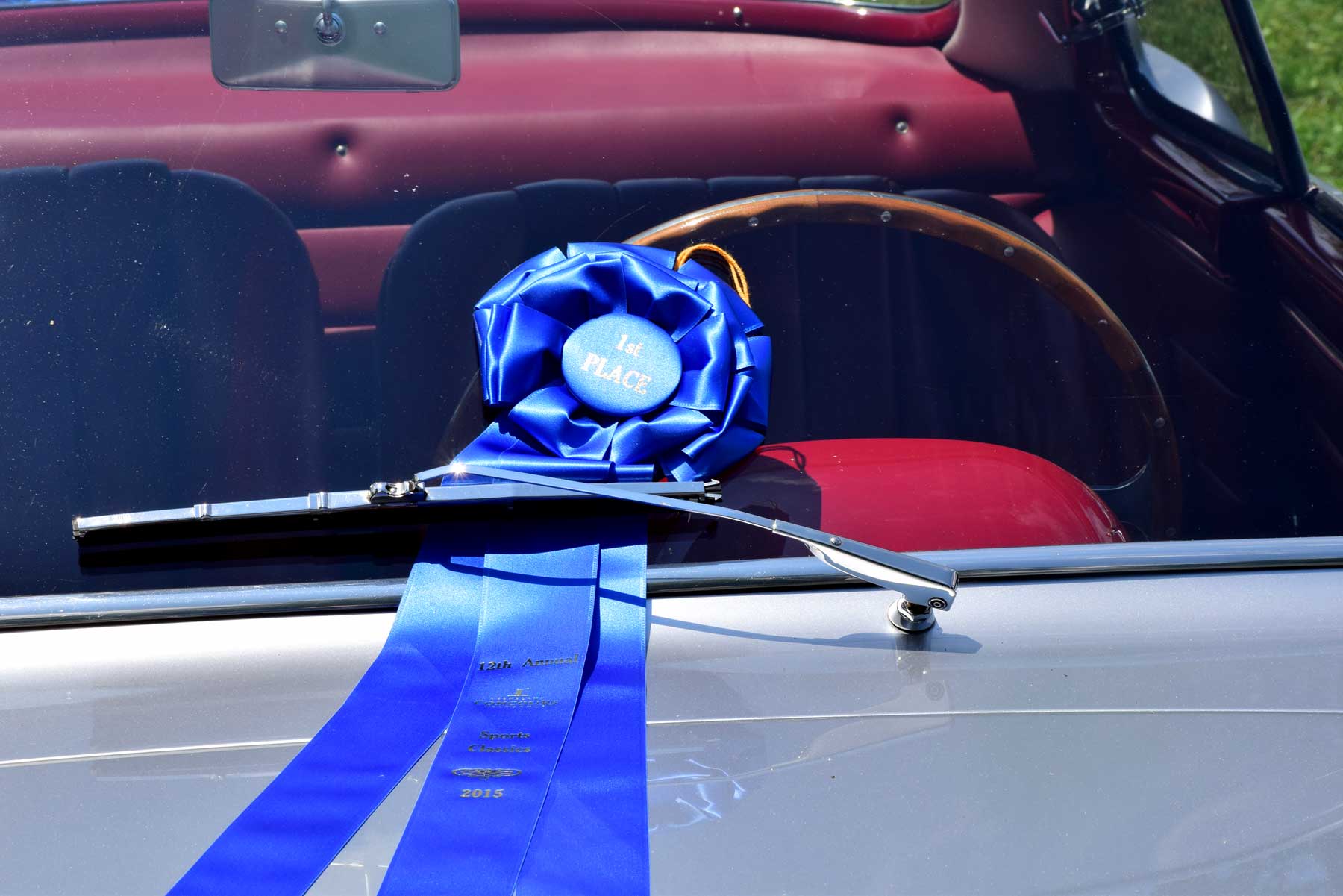 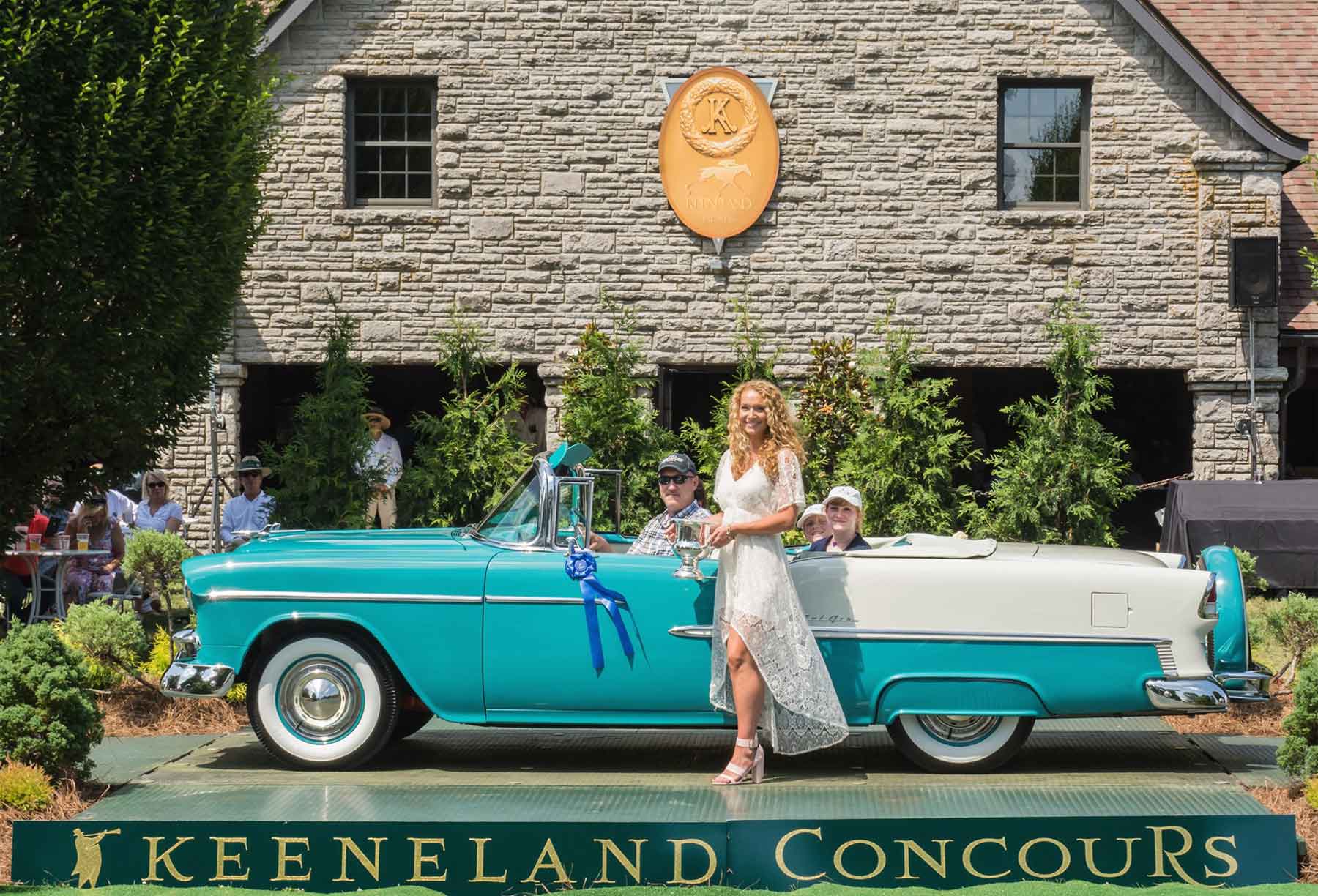 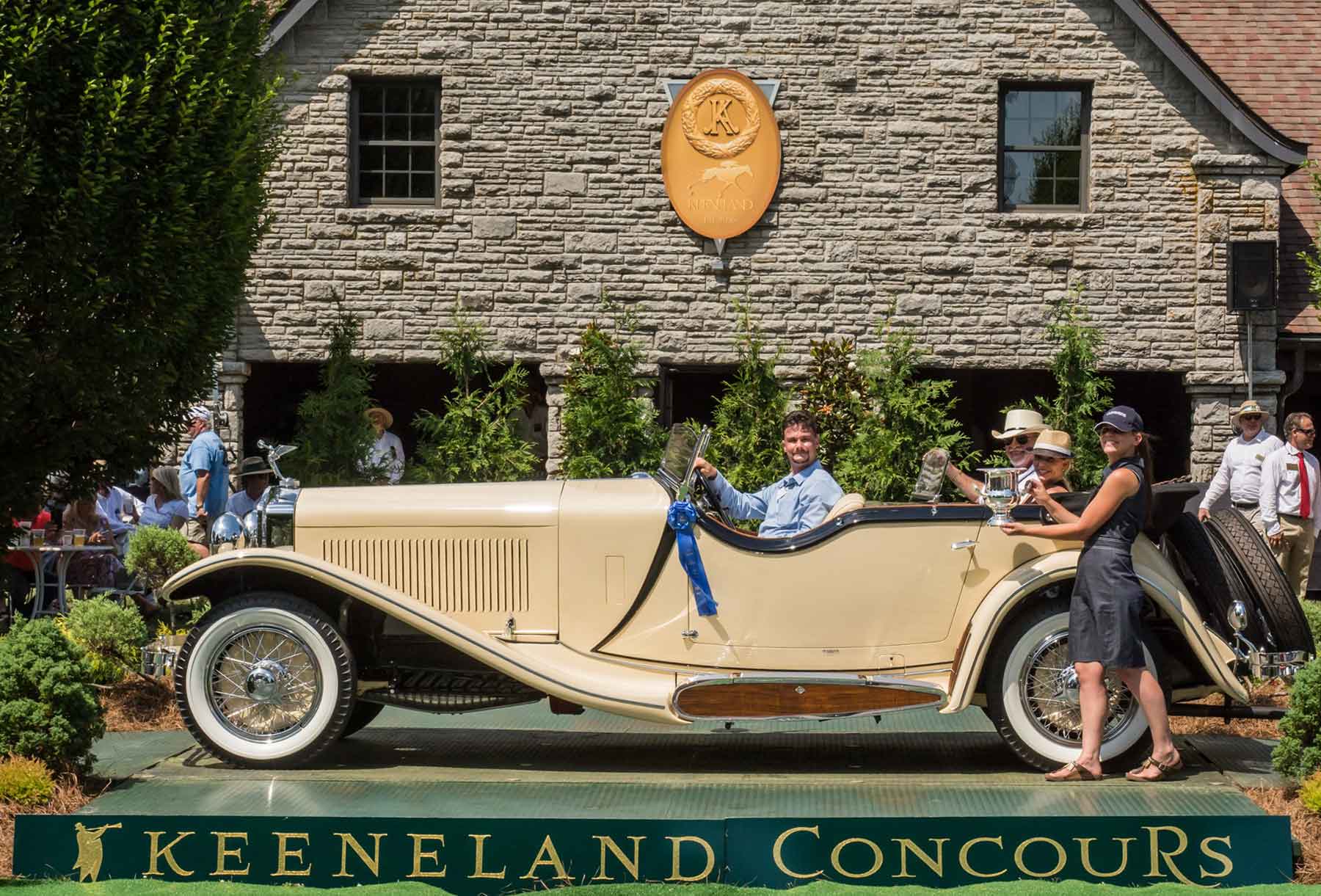 View full-size gallery of all images

Officials chose not to comment for this article until the judging committee completes its review of the scoring system. Stay tuned for a follow-up report.

There do exist a few proprietary digital scoring systems, which can be found online. However, to the best of our knowledge, this is the first time a major concours has gone paperless.

Photos: all images by John Olman, except the two podium views by Keeneland Concours.