The ninth annual Greystone Mansion Concours d’Elegance, scheduled for May 6 in Beverly Hills, California, was cancelled this week “due to unforeseen circumstances.”  The all-you-can-eat-and-drink extravaganza was a well-attended fundraiser for Friends of Greystone, a non-profit organization that helps to preserve and restore the historic 55-room mansion/estate, which is owned by the City of Beverly Hills..

The event was known for its fresh sampling of cars each spring from the seemingly unlimited supply of outstanding collector vehicles in Southern California. The Peterson Museum and Jay Leno were among the avid supporters. 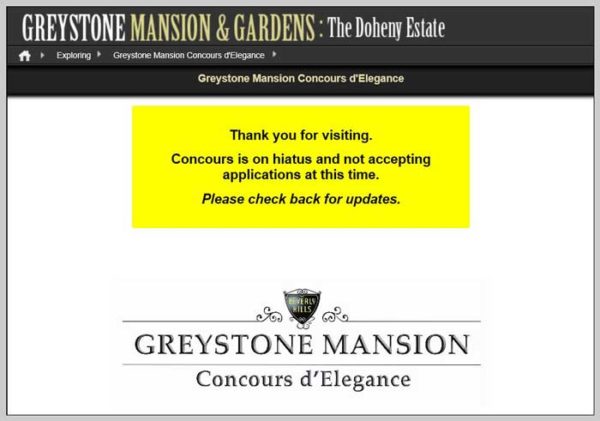 The Arizona Concours enjoyed a 4-year run, but decided against a 2018 show, citing lack of corporate support. Their website displays a gracious thank you note, recognizing those involved for enabling more than $300,000 in donations to Make-a-Wish Arizona. It appears they are keeping alive the possibility of reviving the event in another year or so.

In sharp contrast, the once elaborate website of the Pinehurst Concours d’Elegance was replaced in January with the two-sentence announcement shown below, declaring that no event will take place in 2018.  Organizers had previously announced the concours at the famed golf resort would be moving from a spring date to fall for 2018. Details of the decision have not been made public so far and the event’s Facebook page was removed. The only online coverage appears to be a post of the same screen capture by our sister site: www.ConcoursDates.com.

For the past 13 summers, the Lake Bluff Concours d’Elegance of Southwest Michigan engaged the community of St. Joseph, Michigan, in a manner unlike other car shows. In addition to the static car display, there were three afternoon “pass in review” parades with commentary by noted concours emcee Ed Lucas.

The discontinuation of the popular concours is explained on its website:

Founder and past chairman Dar Davis and chairman Anne Odden have both decided to retire. In addition, the City of St Joseph has changed its policies so that the Lake Bluff Park will no longer be available for the Concours.

The good news part of this post is that the Lake Bluff Concours spot on the August show calendar is being “replaced” by the Concours d’Elegance at Copshaholm, about 40 miles away in South Bend, Indiana. It’s being organized by the Studebaker National Museum with considerable support from the Southwest Michiganders.

The other new show — the Greenbrier Concours d’Elegance — makes its debut on May 6 in the resort town of White Sulphur Springs, West Virginia.